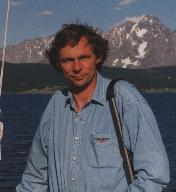 Since 2006 at the BSH as leader of the German ice service and the German Baltic sea water level service.
Regular member in several professional affiliations (AGU, BSIM, IICWG, etc.), Member of the JCOMM Expert team on sea ice.

On these pages I present some of my oceanographic and sea ice work. For most recent work it is best to check the publication list or go to the BSH website or directly to the website of the ice service.

"Eiswinter an Nord- und Ostsee" A short text in German about the ice winters at the German coast.